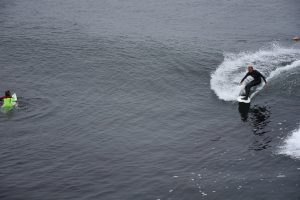 Since the 1970s, recordings of ocean waves have been the stock and trade of nature sound recordists and new age musicians. This is due in large part to the success of one man named Irv Teibel, who all but invented the hippie soundscape. He recorded ocean waves, birds and soothing streams and packaged them as a groovy “Decongestant For the Mind,” perfect for massage therapists and California dreamers.

Even if you have never heard of Irv Teibel, you know his influence. You may have even seen his Environments series in your local thrift store record bin. His first album included the “Psychologically Ultimate Seashore” that was marketed, brilliantly, as “The Future of Music.”

In fact, Teibel’s album did have a lot in common with music. It was a fabrication of editing and mixing that included, yes, some real ocean sounds (from New York’s Brighton Beach), but also computer-enhanced white noise that created something that Teibel felt was even more authentic. (You can read an excellent profile of Teibel inAtlas Obscura.) Whatever it was, it struck a chord and Teibel sold millions of copies from the series. Now many people assume that what they heard on those albums was an accurate reflection of the natural environment.

That can be a little frustrating. When I make recordings, many people assume I am out to capture the soothing, relaxing sounds of the environment. Some of the sounds on the library’s Acoustic Atlas are actually pretty relaxing, but that’s not our goal. We’re trying to capture what places and animals really sound like, which can be surprising. Frogs don’t always go ribbit, birds aren’t always mellifluous and oceans don’t always wash gently against the shore.

That said, I felt the presence of Teibel over the weekend as I trekked out with my microphone to Natural Bridges State Beach in the hippie enclave of Santa Cruz, California. I have recorded ocean waves at many different beaches across the West and down into Mexico. They all sound a little different. Some sound radically different. It depends on the geology of the beach, the weather conditions and many other factors. In this case, the medium-sized waves pounded the sand in a nice, low frequency pulse of Teibel-esque white noise.

It has always struck me as odd that ocean waves are soothing to people. They can be quite loud, and create an insistent wall of noise that is hard to write off as mellow background pablum. Waves are intense and crash on the shore. Given the chance, they might pick you up and sweep you out to sea. But I admit that I too find them calming. I don’t know why that is, but I’m a sucker for the sound of waves just as much as anyone. Feel free to get out your incense and scented candles and take a listen.

Listen to Recording on SoundCloud