Notes from the field: listening to sea otters 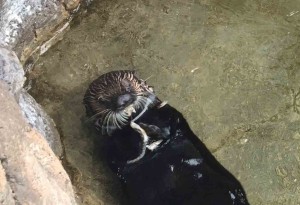 A friendly sea otter at the Seattle Aquarium. Photo by Jeff Rice.

Scientists say that mammals have the most complex and varied vocalizations in the animal kingdom. Yet, other than the ubiquitous babel of humans, there are just not a lot mammal recordings out there. At least compared to most other vertebrate species. We hear bird calls every day, but when was the last time you heard a meadow vole, or a trowbridge shrew? Or a sea otter for that matter?

Recently, I found myself at the Seattle Aquarium where a young sea otter named Mishka was calling for her breakfast. If you are like me, you may not have heard a sea otter before. This is partly because the animals themselves are rare—they are listed as endangered in California and Southwest Alaska—and they aren’t known to make a lot of sounds to begin with.

Aquarium curator of birds and mammals Traci Belting told me that sea otters are typically very quiet: “If you were to find an entire raft of otters, you could be watching them for an hour and never hear a sound. There could be a hundred animals in the group and you’ll never hear anything.” When they do vocalize, she says, it is usually between individual otters and may include grumbles and growls, and intermittent sneezes. Pups are less shy. You can hear Mishka’s occasional calls at the aquarium until she grows out of the habit and becomes a much more taciturn adult. Take a listen to what are referred to as sea otter “pup screams.”

Special thanks to the Seattle Aquarium for allowing me to visit the aquarium to record their sea otters. These audio recordings are available for use under a Creative Commons Attribution-Noncommercial-No Derivative Works 3.0 United States License; http://creativecommons.org/licenses/by-nc-nd/3.0/us/.