Earth to Paris – Listening to a changing climate 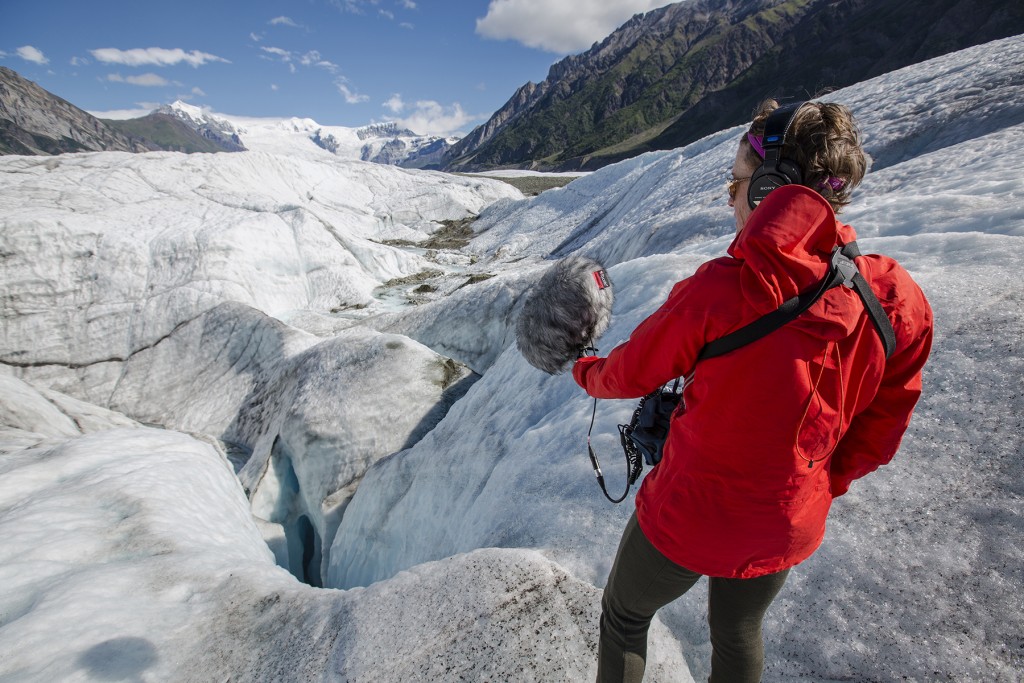 The Acoustic Atlas is teaming up with the National Park Service to record sounds and stories related to parks, science, and resource management. NPS correspondent Jennifer Jerrett (pictured above) reports on her earlier fieldwork in Alaska with some contemplation around the 2015 Paris Climate Conference. Photo by NPS/Jacob W. Frank

I’ve been following the traffic on social media surrounding the developments of #COP21 and it’s got me thinking about a recording trip I made to Alaska’s Wrangell-St. Elias National Park earlier this year. Wrangell-St. Elias is our nation’s largest national park, and it’s known, among many other superlatives, for its mind-boggling glaciers. I made some recordings from the Root Glacier there:

Sounds of crampon-strapped boots as folks picked their way across the rough surface of the glacier:

Listen to sound of walking with crampons

Sounds of meltwater flushing down the deep, well-like shaft of a moulin:

Listen to sound of water on glacier

And the freight-train sound of huge volumes of water rushing through a supraglacial stream:

Listen to sound of water rushing through a supraglacial stream

How long will these sounds be around up in Alaska where folks on the ground are already seeing the effects of climate change?

I interviewed one of these people: a gentleman living way off the grid, on a little chunk of land deep in the heart of the park. He’s been living off the land there for more than 30 years, in a home he hand-built from materials he hauled in on his back. During our conversation, in which he spoke eloquently and earnestly, we talked a lot about the changes he’s seeing; about how those changes are affecting his way of life and the lives of so many rural subsistence users in Alaska.

As I write this, the snow is flying outside my office at HQ here in Yellowstone National Park, and so it might be easy for me to feel some indifference to the idea of a warming planet. But thinking about that interview gives me context. There’s a real person with an important story that trumps the climate change narrative so many of us have become desensitized to. It makes me pause and reflect on my own choices—even way down here—and what those choices might mean to my friend tucked away in the woods of Wrangell-St. Elias.

Listen to more of Jennifer Jerrett’s recordings for the Acoustic Atlas.