The Sound of Summer in Montana 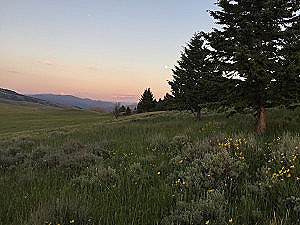 Sunset on the Flying D Ranch in southern Montana. Photo by Jeff Rice.

It was a pleasure to record this month at the Flying D Ranch outside of Bozeman. The 116,000 acre ranch sits on the edge of Big Sky in the Yellowstone corridor and is famously owned by billionaire conservationist and media mogul Ted Turner. This working ranch is known for its thousands of free range bison, but it also shares the land with wolves and grizzlies and countless other wildlife.

Here are sounds gathered over two days at the ranch in July with the special permission of the Turner Endangered Species Fund. This is summer in Montana at its best.

This recording captures the sound of one of the ranch’s larger bison herds.

Listen to bison herd on SoundCloud

A distant wolf calls at dusk

Listen to wolf sounds on SoundCloud

Here, a sandhill crane flies through a meadow in the early morning hours

In this recording, coyotes call near their den at sunset. A coyote pup later found the small recorder and played with it and chewed on it over the course of several hours. At the end of this audio file you can hear a coyote crunching on what sounds like a bone as it occasionally nudges the recorder.

Click here to listen to the coyote family on SoundCloud

This soundscape features the calls and knocks of either red-naped or Williamson’s sapsuckers. Note the distinctive knock pattern.

Spanish Creek wends through the valley.

Click here to listen to Spanish Creek on SoundCloud

Cliff swallows call from the eaves of a barn at Cow Camp.

Click here to listen to the sounds of swallows on SoundCloud

All recordings were made by Jeff Rice for the Acoustic Atlas at Montana State University: acousticatlas.org Permission to record on the Flying D Ranch was provided by the Turner Endangered Species Fund with special assistance from ranch biologist Val Asher. Use of these audio files is allowed in accordance with the Creative Commons Attribution-Noncommercial-No Derivative Works 3.0 United States License; creativecommons.org/licenses/by-nc-nd/3.0/us/.