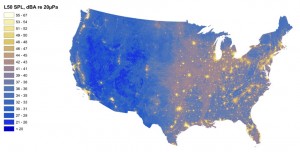 The National Park Service has released a new map showing human-caused noise levels at parks across the nation. Yellowstone National Park shows up as one of the quietest parks, according to CityLab, which reported on the map presented at last week’s meeting of the American Association for the Advancement of Science (AAAS) in San Jose, California. The map is based on 1.5 million hours of sound level measurements conducted by the agency’s Natural Sounds and Night Skiesdivision.  In the coming months, the library’s Acoustic Atlas will be collaborating with the National Park Service to record sounds and sound-related stories from Yellowstone and surrounding areas.

View the map at Science magazine.

Read an abstract of the presentation by the National Park Service.