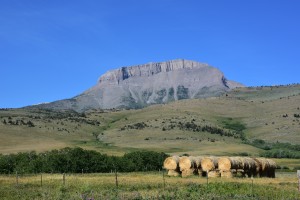 If ever a place beckoned to a nature recordist, it is Ear Mountain. I had never been there, but saw the name on a map and had to visit.

I happened to be in nearby Choteau, Montana for a project related to the writings of Ivan Doig. This summer, I am tracing some of the locations Doig wrote about in books like This House of Sky and English Creek. The project is supported by the library’s Acoustic Atlas, and over the past month it has taken me from White Sulphur Springs to the Rocky Mountain Front, with a few detours to the northernmost part of western Washington.

Doig, who passed away in 2015, was a leading writer of Western literature. He wrote 16 books of fiction and non-fiction, many of them set in his native Montana. The MSU library is now digitizing and archiving his papers, and even if you don’t know Ivan Doig, you will recognize the country he wrote about.

What draws me personally to Doig’s books is not just his ear for plot and dialogue, but his sense of place. He wrote about what might be described as ‘Doig country’—the windy prairies and forests of central and northern Montana as experienced by its ranchers and early settlers. That’s what I will be documenting through sound, and I’ll blog more about this project as the summer progresses. I’ll follow some of Doig’s characters around the West, and I will use this space as a kind of notebook to share sounds and stories from these trips.

My first stop in this series is the valley below the aforementioned rock near Choteau. It turns out that Ear Mountain lives up to its name. It is a draw for songbirds that are attracted to its transitional habitat. It is the ‘front’ part of the famed Rocky Mountain Front, where the mountain connects to the nearby grasslands. The Ear Mountain Wildlife Management Area where I visited is also a big draw for grizzly bears. It is one of the last places in the world where grizzly bears still venture onto the prairie. At dawn on July 5th, I didn’t see any bears, but the wind settled down enough for the birds to go into full song. Listen in this recording for house wrens and and robins. Don’t forget your bear spray.

Listen to recording on SoundCloud