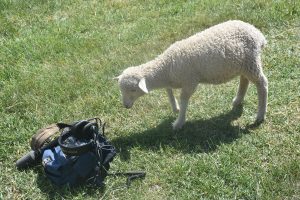 The library celebrates the launch of the Ivan Doig Archive later this month and the Acoustic Atlas is pairing audio recordings with some of the collection’s digital content. This summer we have gathered everything from the sounds of birds and coyotes to haying equipment, all relating to the late author’s novels and other writings.

As the summer comes to a close, we have saved the best for last. Our collection wouldn’t be complete without a nod to that staple of Montana ranching, the sheep.

Sheep ranching was central to Doig’s life and stories. His father and his Scottish relatives herded sheep across the high meadows around White Sulphur Springs, and for a while at least, central Montana was wild and woolly.

“All the places I liked best had the sounds and smells and feels which came one way or another from the herds and flocks out on the leathered slope of grassland,” Doig wrote in his memoir This House of Sky.

When I visited White Sulphur Springs this summer, I assumed that finding sheep would be the least of my worries. I half expected the town to be overrun with them.

Surprisingly, there are actually few sheep left in the area. For years, cattle have been more profitable and far more popular. One small flock of sheep stood on the edge of town just off the highway, but I was told that if I wanted to find a larger herd I would need to go about 30 miles down the road. That meant the Bair Ranch near Martinsdale.

Luck was with me when I called there. “Sure,” they said. “We’re going to be driving about 3000 sheep up the road to a new pasture tomorrow.” A good sheep drive doesn’t happen every day, even in Montana, so I jumped at the opportunity.

I showed up at 5:30 AM just as the herders were arriving. Many of them were from Argentina and spoke mostly Spanish. Off-road vehicles took the place of horses, but other than that there seemed to be little difference between modern sheep herding and Doig’s era. The foreman was expecting my arrival and directed me to set up my microphone near a gate in the fence — and to stay out of the way.

There is little stopping a stampede of sheep. “In their best of times sheep go through life in a near panic,” Doig once wrote. But the herders and their dogs knew what they were doing. The sheep crossed onto the road in a surprisingly orderly fashion. You could hear their bleating from more than a mile away as they moved down the highway toward their new pasture. Take a listen and see if you can count the number of hooves and divide by four.

You can read more about the Doig exhibit in an article published last May in the Bozeman Daily Chronicle.

Listen to recording on Soundcloud